Apparently I am on something of an architecture kick. In addition to finding one of the most incredible library parking garages in the world, I’ve discovered a stellar bus stop.

Those are words I never thought I would type.

When bus stops come to mind, I typically don’t think of anything extraordinary. The stop nearest to my old apartment had no sidewalk leading to it, and though it was supposed to be a covered bus stop, the roof had blown off long ago. I spent many damp mornings there waiting to catch a ride into town.

One bus stop in Singapore is a little different. 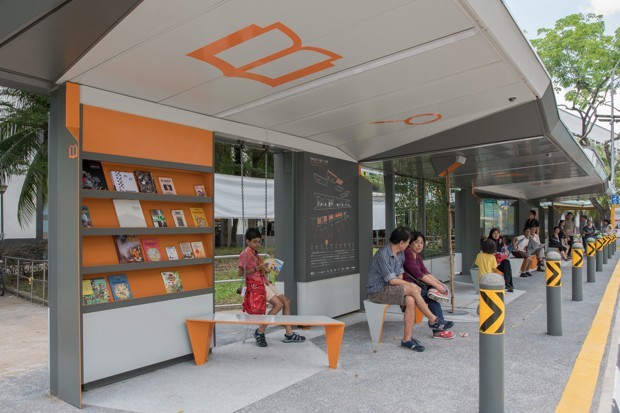 In tandem with DP Architects, the Singaporean government has worked to create an experimental bus stop in the Jurong Lake District. The bus stop is intended to inspire people to take greater ownership of their community and features free WiFi, phone charging stations, bike parking, and a swing. Unlike my old stop, it also has a roof.

But most importantly, it gives people access to books. The bus stop stocks a rotating group of print books suitable for people of various reading levels. If patrons aren’t interested in those titles, however, they can use the bus stop’s interactive stations to download e-books from the National Library. That kind of literary accessibility is a dream to me, and I love that the government is committing to it. It supports public libraries and public transportation simultaneously.

Now if only the architects had chosen to make their bus stop library colors other than orange and grey…It’s certainly good for visibility, but if sadness had a shade, those two would make up mine.

45 thoughts on “A Bus Stop for Book Lovers”