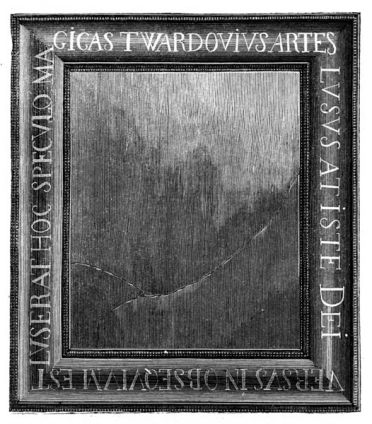 Sometimes myths aren’t simply stories told around a campfire in the dark of night. Sometimes they are personal. In honor of the approach of All Hallows’ Eve and All Saints’ Day, I want to share a spooky bit of folklore that is in some small way a part of my history.

In the 16th century, a Polish nobleman named Pan* Twardowski lived near Krakow. Though he already had great wealth and access to the highest echelons of society, he wanted more power. So in exchange for knowledge and magical abilities, Twardowski sold his soul to the devil. However, Twardowski knew that many deals with the devil ended badly, so he made a special clause in his contract that stated that the devil could only take his soul when Twardowski was on a visit to Rome.

At first, their arrangement served Twardowski well. He became the sorcerer and astrologist to Polish King Sigismund Augustus, and he luxuriated in the authority the position offered him. When the king’s wife died, Twardowski even used a magical mirror to summon the ghost of the dearly departed queen to act as a brief comfort to the king.

However, not even the cleverest of men can escape fate. One day the devil tricked Twardowski into spending the night at an inn named Rzym, the word for “Rome” in Polish. As the devil dragged away Twardowski’s soul, the magician began to pray to the Virgin Mary for aid. The prayer sent the devil into a fit of agony, and he dropped his cargo.

Twardowski fell, and fell, and fell until he finally landed on the moon. He lives there even now, alone except for his friend who he transformed into a spider long ago. When Twardowski gets too lonely at his lunar outpost, he sends his spider down to the Earth on a silvery thread in order to bring back news of the world.

The tale is a fantastical one, but I am attached to it nonetheless. If nothing else, I do like to imagine Pan Twardowski and his spider sitting together on the moon. We often talk about books can influence our lives, but myths and legends can inspire us just as much. I think that the dream of many writers, or at least a dream of mine, is that people who hear or read or stories will carry them through their lives.

* “Pan” is a Polish honorific. Back in the 16th century it would have been the equivalent of the English term “sir”.

If you are interested in learning more about the Twardowski legend, Tomasz Baginski recently produced a short sci-fi film based on the subject that you can view here. (And who doesn’t want to see a nobleman deal with the Lord of Darkness while on a lunar base?) I’d love to hear if you all have any myths that feel particularly personal and if those stories inspire your writing. I suspect that Pan Twardowski’s dark magic intrudes upon mine even when I least expect it.

The inscription says “Twardowski played with this mirror, performing magical tricks. Now it is destined to serve God.”

25 thoughts on “Legends and the Devil in a Name”